First garden meal of the season

Jim and I are fans of the television show Chopped and he’s been promising to give me a Chopped challenge. It came on Sunday in our modified version—prepare an entrée plate, no time limit, with fresh garden asparagus, onions, arugula and radishes.

So I went to work. All of those great veggies sounded like they would pair nicely with rice and fish, so I first got out two salmon fillets to unthaw. Then I put on a pot of brown rice to cook. Next, I sliced the onions thinly and put them in a sauté pan with olive oil and a little butter and salt to slowly caramelize them. We love onions that way!

With the longest cooking items on, I turned the oven on 425 degrees then cut the asparagus in one to two inch pieces, tossed it with olive oil, balsamic vinegar, salt and pepper and put it in to roast. I also prepared the salmon with a little olive oil, salt and pepper and put it in approximately 10 minutes later. Remember, you only need a small amount of salt to bring out flavors; no need to go overboard because then you’ll only taste salt. 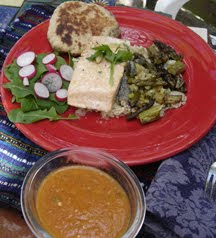 As the rice cooked, I considered what to add to it. I decided to head outside to check out the herbs. I cut some oregano, parsley and sage. I put the sage into the pan where I was slowly browning some butter and two whole garlic cloves. Then I chopped the oregano and added it to the cooked rice, along with chopped arugula and a little bit of freshly grated parmesan cheese. I used that as the bed for the salmon (topped with fresh parsley) and the onions and asparagus, which I mixed. On the side, I placed a fresh arugula and radish salad, a piece of parmesan flatbread (leftover) and a bowl of tomato soup (leftover also).

Since the sun was shining, I suggested we eat outside, which turned out to be a wonderful choice for our first garden meal of the season. By the way, it might not have gotten me anywhere in a competition but Jim gave the whole thing a 10 and didn’t even add salt. This recipe is a keeper!
Posted by Beth Dotson Brown at 11:04 AM