Everyone who pays attention to food these days is talking about the new food guidelines in the U.S. that trade in the visual image of a pyramid for a plate with proper proportions of each food group. When I look at a plate I’m less likely to see food groups and more likely to see colors. Eating a rainbow of foods means you’re getting an array of nutrients that your body needs.

My eye was quite pleased when we had vegetarian night, thanks to the bounty from the garden. On the menu: Roasted Vegetables with Penne and Spinach Crostata.

I had been wanting to try the Spinach Crostata recipe since I watched Lidia make it on Lidia’s Italy a few weeks ago. She makes cooking look so effortless! When I read the recipe it didn’t appear as quick and easy as it had seemed on television, but it still wasn’t difficult.
For the Roasted Vegetables with Penne I adapted a recipe from Giada de Laurentis. I tend to add more vegetables than some more traditional pasta recipes call for and since I’m cooking for only two of us, I almost always have to cut down the amounts. With credit to Giada for starting me off on this idea, here’s what I did. 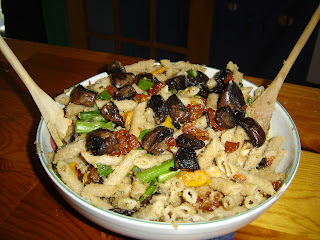 Cut the vegetables to bite-size, drizzle with olive oil and sprinkle on salt. Roast in 400 degree oven until tender. I used butternut squash (left from last season) and asparagus and they were ready in about 20 minutes. Be sure to stir them a couple of times so one side doesn’t burn. In the meantime, toast the chopped almonds, sautée the mushroom and re-hydrate the tomatoes.

Cook pasta in salted water. Remove pasta with large pasta dipper and place in warm bowl. Sprinkle with bread crumbs and mix. Mix in olive oil to coat the pasta with oil and crumbs. Toss in vegetables and almonds. Salt and pepper if needed. Enjoy!
Posted by Beth Dotson Brown at 8:36 AM