Two years ago or so my goddaughter and I made gnocchi together. She enjoyed it so much that she has repeatedly asked since then if we could make it again. On Sunday, we did just that.

Preparing gnocchi (an Italian potato dumpling) is a great experience for anyone who enjoys tactile cooking. The potato, egg, flour dough becomes silky as you knead then roll it into a rope. After that, you cut it into small pillows that you can “roll” with a fork or a honey dipper. Either of them shapes the pillows with subtle lines that help absorb whatever sort of sauce you decide to put on it.

Anna and I made what we called Italian Patriot’s Sauce with sautéed spinach, onion, red pepper and garlic. The colors of the Italian flag suggested its name. With that combination of fresh from the garden vegetables, you also get some nutrition to add to all of that butter and potato.

We used Michael Chiarello’s gnocchi recipe. Instead of using only egg yolks as the recipe calls for, I use 2-3 whole eggs. 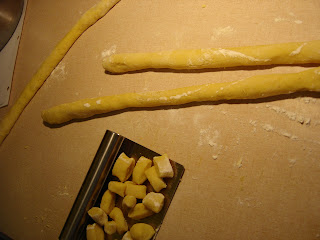 After we mixed up the dough, we rolled it into ropes. 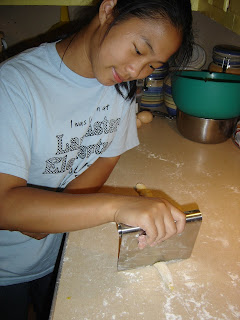 Next, Anna cut it into small pillows, then rolled it with the honey dipper.


While the gnocchi rested, we prepared the sauce by slowly sautéing our vegetables in butter. 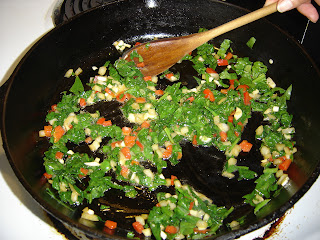 After dropping the gnocchi into boiling water, we were only a few minutes from topping it with the sauce and eating. 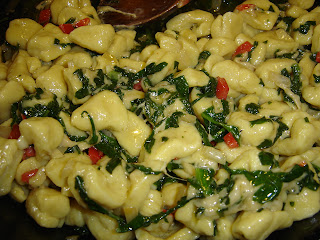 We decided that the next time we need to make a double batch. One batch barely feeds four people who love gnocchi!