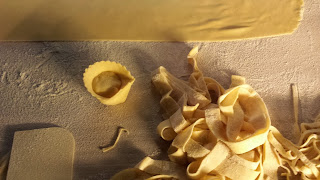 Say Italian food and many people think of pasta. Although pasta certainly isn’t the totality of the Italian culinary experience, it is one aspect that I like.

I’ve been making my own pasta for a few years but not frequently or confidently. When I learned we would be making pasta in my cooking class at the Villa Bordoni, I was thrilled.
Chef Collin took us through the process step-by-step. He measures his ingredients using a scale rather than cups. Many chefs will tell you this is the more accurate way to measure. He does the kneading and shaping for the pasta on a smooth, wooden board and uses semolina flour to keep the dough from sticking.

The chef’s recipe, a basic combination of flour and eggs, came into a dough similar to what I had produced at home. Because the resulting dough is hard and extremely difficult to knead, I always thought I was doing it wrong. Maybe I need more liquid. Maybe I used too much flour. Not according to Chef Collin. We each took a turn kneading, using the palms of our hands more than our fingers, then he wrapped it in plastic and put it aside to rest. 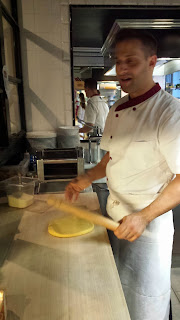 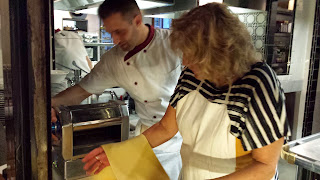 After resting, pasta goes through a hand-turned pasta maker that makes it increasingly thinner. Chef Collin cut the pasta into portions. I prefer to work with dough the size of a large egg. With his expertise, however, Chef Collin used a significantly larger piece. After partially rolling it out, he began putting it through the pasta maker on its widest setting. As he cranked with one hand, he held out the other to catch the pasta as it came out, keeping it straight so it doesn’t fold on itself. One of our class members also helped with the process. Fold the pasta in three and put through again on the next setting. As the machine kneads the pasta, it comes out thinner and longer each time. 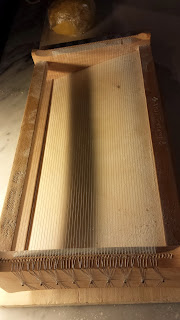 Next, it’s time to cut it into portions to fit onto a chitarra. Chitarra is the Italian word for guitar. The tool is a wooden frame with wires strung across it. When you put a sheet of pasta on top and use a French rolling pin to add more pressure, the wires begin to show through the pasta then cut them into spaghetti. And there you have one nest of spaghetti for one serving of pasta. Perfetto! 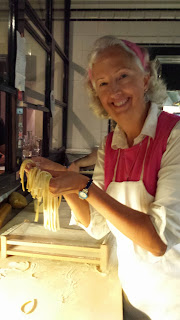 Our generous instructor also showed us how to sprinkle a sheet with semolina, fold and cut into the wider papparadelle pasta. He then made various shapes, for which I was most thankful because one of my favorite pastas is ravioli. 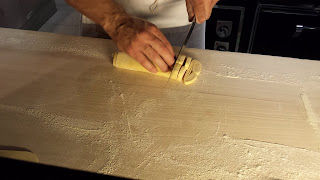 Using Chef Collin’s techniques, I made pumpkin stuffed ravioli on Sunday. The first time I tried it a few years ago, my raviolis busted open in the cooking water. Not this time. Thanks to Chef Collin’s tips, I confidently made the dough and put the pasta through the maker, I cut the raivolis then put in less filling and used water around the edges of the ravioli to seal them. I think I’ve passed pasta-making 101! 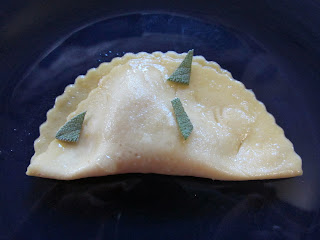 Place flour on work surface. Make well in the enter. Break eggs into well and gradually incorporate the flour with the eggs with your hands. When the mixture starts to firm up, knead with the heel of your hand for about 5 minutes. Wrap in plastic and let it rest for at least an hour before proceeding.

Posted by Beth Dotson Brown at 8:58 AM