Use what you have to make something scrumptious to eat 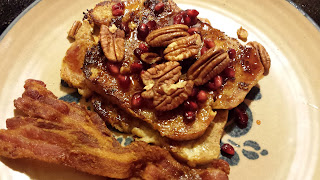 I went on a trip around the world this month thanks to my Secret Santa. Each day at work I received a surprise from another part of the world—tea from Sri Lanka, sesame fudge from Turkey, Christmas soda from Scandinavia and chocolate from Finland, to name a few. When I saw the cardamom milk on my desk from India, I knew it would give me an opportunity for experimentation in cooking.

I’m not much of a milk drinker, even though this one had an enticing smell. The ingredients listed milk, sugar, cardamom and almond. It was like something the cooks on Food Network’s Chopped would find in their basket then put to good use. When I woke up this morning craving French toast, I knew I had found a good way to satisfy my craving and to use the milk.

Maybe French toast is one of my favorite breakfasts because Mom made it for us when I was a child. I make mine like she did by mixing an egg and milk. Dip the bread into the mixture then cook on a hot griddle with melted butter and olive oil. Instead of regular milk I used the cardamom milk plus some heavy cream to add even more lusciousness.

Although I don’t like overly sweet French toast, I do use syrup. However, I found none in our kitchen this morning. But I did find a jar of plum jelly—overly sticky plum jelly that felt like it would graft to your teeth like cement. It was part of the first batch of jelly I tried to make and I obviously failed. It’s hard for me to give up even on a failure because I knew it would be useful for something. I added water to the jar, heated it in the microwave and turned it into the perfect syrup to top my breakfast. Since it’s the season of the mighty pomegranate, I sprinkled the toast with pomegranates and toasted pecans. My husband made me a couple pieces of bacon to balance out the sweetness.

Whatever you have in your kitchen, you can turn it into something delicious.
Posted by Beth Dotson Brown at 5:54 PM