On television the other day I saw an advertisement for a show in which people throw pumpkins. Aack! Throw them and not eat them? Watch that beautiful flesh splatter across the ground instead of cooking with it? Oh my, all that Vitamin A going to waste.

I used our final fresh pumpkin of the season for Thanksgiving. I had heard someone on a more food-friendly television network talk about cooking Thanksgiving stuffing in a pumpkin so I decided to try it. It worked beautifully.

I don’t have a favorite stuffing recipe (it’s never been my most-beloved Thanksgiving dish) so I copied one out of a magazine and went to work. My pumpkin was a medium size that could easily sit on a dinner plate for serving. I cut off the “cap” and set it aside then proceeded to remove the stringy insides and the seeds. When it was clean, I filled it with stuffing. I still had stuffing left so I put it into a bowl to use later in the weekend. 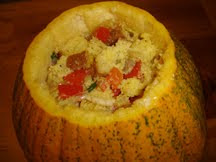 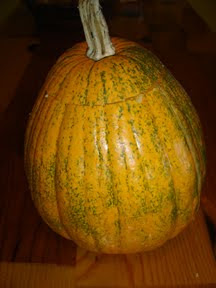 With the oven set at 450 degrees for roasting, I put the pumpkin on a cookie sheet then placed it in the oven with the cap on. In 30 minutes, I checked it. The pumpkin was yet soft enough and the scent wasn’t strong enough for it to be done. I also took the opportunity to spoon out three tablespoons of turkey drippings to pour on the stuffing. Next, I returned the pumpkin to the oven, sans top, to cook for another 15 minutes.

That’s when it looked and smelled done. It turned out to be a picturesque addition to the Thanksgiving table. Plus, everyone liked the stuffing! This was so much fun that I might learn to love stuffing so I can roast a filled pumpkin more than once a year.

Next: stay tuned for what to do with that leftover stuffing and pumpkin.
Posted by Beth Dotson Brown at 1:52 PM