After too many months of putting it off, I finally bought the fixtures for my rain barrel so we could put it to use. In the process, I meet an enthusiastic company founder who believes in supporting the local economy and I beautified my backyard.

A friend started me on this journey more than a year ago when she gave me a rain barrel without the fixtures. For a year, we kept the barrel as it was, putting it under an overflowing gutter during the warm weather months. It did collect water but not in the way intended. 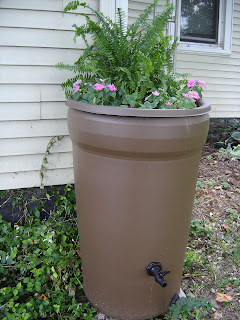 A couple of months ago I finally examined the barrel to find it came from http://www.raintainer.com/. I was so intent on finding out if they could sell me the parts I needed that I didn’t bother to look at the “about us” page. When Mitzi Bender called me to respond to my inquiry, I discovered she was in nearby Lexington.
When I met Mitzi, she told me more of her story. She wanted a rain barrel for her yard but discovered it had to meet specific neighborhood regulations. So she found a friend to work with her on a design that would satisfy the regulations. That’s why their barrel includes a planter on the top.

The team wanted to be able to supply local businesses so they found a company in Mt. Sterling that could manufacture the barrels. They’ve now sold their product not only in Kentucky but also to cities elsewhere in the countries.

Mitzi assured me I could easily put it together myself. I had to screw on on the spigots to get the barrel close to working order, which wasn’t too much of a challenge even though the holes are quite deep into the barrel. The part I didn’t want to attempt was sawing off the downsppout to attach a flex hose to guide the rain into barrel. I turned that part over to my husband.

Meanwhile, I filled the planter with late-season closeout bargains from the greenhouse. Since the barrel sits in the shade next to the house and near the garden, I bought a Boston fern and impatiens to fill it. The combination makes me smile every time I walk around the corner.

We don’t have a lot of watering time remaining this year but I am using my rain barrel and have discovered what seems to be the best place for it. Next year I’ll attach a soaker hose that I can place in the garden where my plants will surely be happy for their rain-refreshment.
Posted by Beth Dotson Brown at 4:21 PM