That was the menu Saturday evening at The 3rd International Pawpaw Conference at Kentucky State University in Frankfort. The conference brought together scientists, growers, preservationists and sustainable agriculture aficionados to share information about pawpaw growing and marketing. Of course, you can’t talk about those things without also doing plenty of pawpaw sampling. Saturday night’s closing conference dinner provided opportunities for that.

Because of its creamy texture, pawpaw cooking works best when the pulp is removed from the fruit then pureed. Then it can be used in numerous ways, always retaining at least some of its unique, sweet flavor. Dishes prepared with pawpaws generally have a faint yellowish to orange color, depending on the amount of pulp used and the other ingredients added. 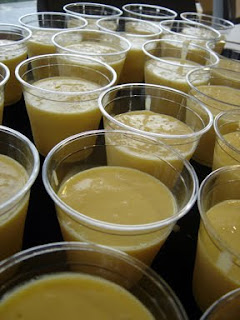 I began the evening with the Pawpaw Smoothie. I’m a smoothie fan so I knew I would like this version that was slightly sweet with a subtle pawpaw flavor. When we heard from the cooks later in the evening, we discovered the pawpaw had been mixed with a couple of other fruits in the smoothie. So if you want to try this at home, choose your favorite fruits and see what you get.

Since I’m not a prawn fan, I relied on Jim to rate the Pawpaw cocktail sauce. It was too sweet for his taste. It likely didn’t stand out because it was prepared from a bottled cocktail sauce to which the cooks added pawpaw puree.

Next we moved on to the meal. As a soup fan, I looked forward to the Curried Pawpaw‐Butternut Squash‐Sweet Potato Soup. I enjoyed tasting a pawpaw dish that wasn’t so sweet, thanks to the curry spices. Rather than a silky, smooth soup, this was thick and slightly chunky. Although the appearance wasn’t the most attractive, it tasted good and was a favorite of one person at my table. 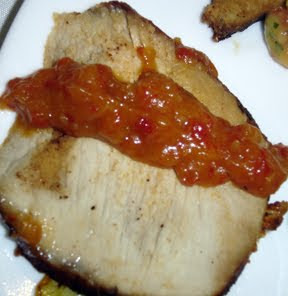 I moved on to try the Pork Loin Medallions with Sweet Pawpaw Sauce. I’m not a big pork fan but truly enjoyed this dish. The sauce was good without being too sweet. This was the favorite of the three men at the table. The chef generously shared the recipe with me (below). 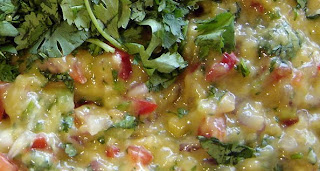 The next item I tried had the most colorful pawpaw mixture— Baked Kentucky Tilapia with Fresh Pawpaw Salsa. This was my favorite pawpaw dish of the evening. The salsa had the typical ingredients—red peppers, jalapeno, cilantro, a very smooth pawpaw. The flavor was excellent with the fish and I would definitely try this at home. One cook at my table said it was similar to the mango salsa she had made.

In between the pawpaw dishes I gratefully ate the vegetables and bread to try a little palette cleansing before I tasted the next item. I left the salad for last and must say the pawpaw vinaigrette rivaled the salsa and someone at our table chose it as her favorite. It was pretty, tasty, and according to the chef (Sheri Crabtree of KSU), easy to make. She mixed it with white wine vinegar, olive oil, salt and pepper and created something unique that I’ll definitely try to imitate.

I must admit that by the time dessert came, I had just about had my fill of pawpaw. Earlier in the day, I had tasted a “Pawzel,” a pretzel made of pawpaw. It reminded me of a bagel and was good with cream cheese. I had also sampled various types of pawpaws and eaten a pawpaw cookie. So when dessert came, I had already had my “sweet” allotment for a week. Still, I never turn down dessert. 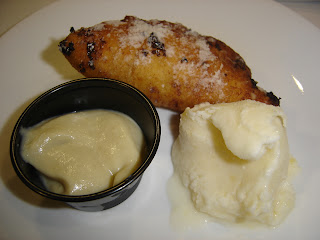 Typically, I don’t waste calories on dessert unless chocolate is included. There was no chocolate on the dessert plate, but it was still a nice ending to the evening. The Pawpaw Crème Brulee was really just Pawpaw Crème since it was served in plastic cups and couldn’t be torched. It had an odd, greenish cast to it (maybe because of the black cup) but it was silky, smooth, rich and good. I also enjoyed the ice cream with its mildly fruity flavor. The fried pie was a bonus thrown in by a KSU student who turned out to be a good cook. Just as he described, it was reminiscent of the fried pies you can find in various places in Kentucky, but this one had pawpaw in the middle of it.

Luckily, when I was in the hallway I met Eddie Reed, the Farm Manager who created the Sweet Pawpaw Sauce for the pork. He and Sheri Crabtree, KSU Co-Investigator of Horticulture, led the cooking crew for the evening. Here’s the recipe he shared.

Heat butter and sugar then add pawpaw pulp to warm. Add red peppers and boil. When boiling, split cayenne peppers and add. Simmer 1 hour then remove cayennes. Now you have sauce.
Eddie said he was hoping the sauce would have more bite to it, so you might need to adjust the cayenne usage if that’s what you’re hoping for.

On Tuesday, look for my post about how to grow pawpaws. And in the meantime, get your pawpaws now if you want to try cooking with them. In Kentucky they’ll be out of season in just a couple of weeks but you can scoop out the pulp, puree and freeze to experiment with one day this winter.
Posted by Beth Dotson Brown at 10:16 AM