Vary your first meal of the day 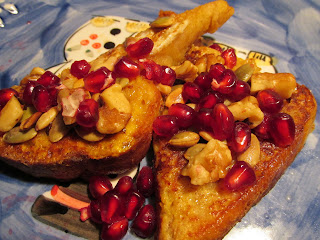 It’s easy to fall into a rut with breakfast. Oatmeal. Cereal. Toast. Eggs. In our house there’s a sort of unspoken every-other-day rhythm of a grain-based meal alternating with an egg based meal. On the grain-based days I typically eat yogurt and fruit instead.


When it gets boring, I like to try something a little different. This morning I recalled that French Toast that my mom made when I was a child. It was one of my favorite breakfasts. Store-bought white bread dredged in an egg and milk batter then cooked on a griddle in a little oil to crisp it up, topped with butter and syrup. It was sweetly good.

Today, I add more nutrition to my French Toast, as well as local products. Did you harvest walnuts this year? Toast pumpkin seeds? Freeze some of those fresh berries when they were in season? Maybe you even made a syrup that you preserved. We still have some strawberry syrup. Or perhaps you bought pure maple syrup, which is now available in Kentucky. Gather what you have to top your French Toast and you’ll come up with something that will give your day a good start.

Break egg into round cake pan or bowl with flat bottom that’s big enough for your piece of bread. Whisk in milk, cinnamon and a couple of sprinkles each of salt and pepper.

On a griddle or in a large skillet, melt butter or oil to coat the pan on medium high heat. When melted, turn down heat slightly. Quickly soak bread in egg mixture then place in pan. Cook 2-4 minutes then turn.
In same pan, drop seeds and nuts next to the bread and turn them frequently. Push them to the side when toasted.

When second side of bread is finished, put one slice on each of two plates. Butter bread if you prefer. Sprinkle on toppings. Drizzle syrup and serve.

Note: One slice of bread is plenty for us because I cut relatively thick pieces of my filling wheat bread. You might vary your amounts depending on your bread choice.

What toppings do you like on French Toast or pancakes?
Posted by Beth Dotson Brown at 9:38 AM No comments: