Last night I hosted 12 people for a Christmas party and dinner. I love planning, cooking and hosting when I have time to enjoy it, which I did. Plus, it’s easy to put it in the time and energy for a group of people you love.

Last night’s gathering was for a writer’s group that I’ve been part of for 11 years. We first met in a local writing class that I taught. Since then, members of the group have published multiple times in all forms of media. It’s amazing to see what everyone has done through the years.

I wanted to take some of the load off them during this season so I offered to prepare our entire celebration for this Christmas season. Most of what we ate came from our garden or from other local sources. Here’s the menu, which turned out so well that I would replicate it again:

Appetizers
Cheeseball and crackers—Mom’s women’s group sells the cheeseballs every year, so this is always a given for my holiday get-togethers.
Spiced nuts—I found this recipe in O Magazine. It’s the first time I made spiced nuts. Next time I’ll cook them for a slightly shorter period of time since they almost burned.
Meal
Lettuce and Spinach salad—I wish I could say it was from my garden!
Fagottini di pollo—Also known as Chicken Bundles. This is a recipe from Lidia Bastianich and you can’t go wrong with it. I used our canned tomatoes for the sauce.
Green beans and purple potatoes—Both from our garden. Potatoes will keep for months in a cool, dark place.
Sweet potatoes and apples—Yes, I used our sweet potatoes. The apples came from Reed Valley, an area orchard that I like.
Winter squash risotto—This is the easiest risotto recipe because you bake it instead of constantly stirring on top of the stove. I used our home pureed pumpkin and one of our remaining butternut squashes. Winter squashes will also keep for a good amount of time inside at a cool temperature in a dark place if they are cured first.
Dessert
Pawpaw Sour Cream Pie—This was from the pawpaws we collected in September and pureed. It’s a little piece of heaven.
Chocolate Bark—I also found this recipe in O Magazine. I made it with dark chocolate and didn’t entirely cover the cracker with chocolate because I liked the contrasting color.
Various other cookies and candies

Yes, it was a feast. Yes, I slept well after the fun and the relaxation following a good meal. Yes, I’ll do it again.

Before I go, I must apologize for forgetting to take pictures of the food. I was having so much fun that I forgot to pick up the camera. However, this afternoon I did get a photo of my Charlie Brown Christmas Village that I wrote about last week. You'll have to look hard to see the little trees. I had hoped we would get snow to liven it up, but until then, this is what greets our visitors. 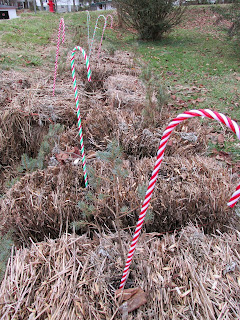 Merry Christmas to you all!
Posted by Beth Dotson Brown at 5:03 PM 2 comments:

The garden contributes to my Charlie Brown Christmas Village


I’ve just come in from a sunny afternoon outside where I snipped bits and pieces from a dying Hemlock tree to use in my Charlie Brown Christmas Village. Yes, sometimes using the bounty from the garden doesn’t mean cooking and eating; it means decorating.

When we moved into this house, there was a Blue Spruce next to the Hemlock that was clearly the older sibling. For a year or two, I cut full branches from the Blue Spruce to use in holiday Christmas decorations. Then an ice storm killed the pretty tree and when Jim cut it down, we used the fertile soil it left us as a new spot to grow vegetables.

Our dear Hemlock kept hanging around but caught a disease a couple of years ago. I must admit that I was so busy elsewhere in the garden that I didn’t research what to do to save the tree. I should have at least done my part. Instead, the death crept upward so that now the fullest, pretties branches are at the top one-third of the tree that climbs above the house gutter. Jim said he was going to cut it down and I imagined another fertile space for gardening, but the tree still stands.

The straw bales that I gardened in this year also remain. I decided to leave them in the raised bed next to the street because I’ll plant in them again next year. So, to help them join the magic of the season, I bought tall, plastic candy canes to put in some of them. No, plastic usually isn’t my style, but when I thought of the color they could add to the brown of the bales, I decided to do it anyway. They looked good, but they need company.

And there the Hemlock stood, tall and proud of the branches that still offered seasonal greens. So when the sun, after a 10-day hibernation, came out this afternoon, I got a ladder out of the garage, found a good place to set it up next to the dead branches, and climbed until I could reach the green branches. I snipped, I cut. Greenery dropped onto my head and onto the ground below me. I took the first load over to the straw bales and stared planting them into the soil at the foot of the bales and into some of the bales themselves. Thus, the Charlie Brown Christmas Village grew.

At this point, you’re probably expecting a picture. You’ll have to wait a week for that because I’m still trying to decide what needs to go into the village next.
Posted by Beth Dotson Brown at 4:33 PM No comments: 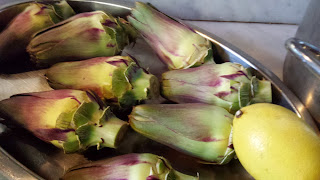 In this final installment of posts about my cooking class at the Villa Bordoni, I want to take a look at stuffed vegetables. We stuffed artichokes, which have their own challenges, but Chef Collin assured us we could also use this same delicious stuffing in other vegetables. Think zucchini for example, but let your imagination go wild. Look at the vegetables that are in season in your area and take it from there.

Lots of people in the U.S. are only familiar with canned artichokes, often mixed with cheese and made into a dip. Fresh artichokes require a totally different technique. Before stuffing them, you must first remove the tough outer leaves and the center, then keep them from oxidizing (turning brown) while cooking and while waiting to be stuffed. Here are Chef Collin’s steps for preparing the artichokes. Keep in mind he grams in his measurements. If you’re using your kitchen scale and can set it to grams, you won’t have to translate the amounts.

Artichokes
1)      Prepare stock for cooking artichokes with water, white wine, bay leaf, a pinch of peppercorns and a clove of garlic. (I remember him adding lemon juice either to this step or to #5 below, but it’s not in his written instructions. Also, he cut a piece of parchment paper to cover the pot when boiling to reduce oxidation.)
2)      Remove tough outer leaves from 8 large artichokes.
3)      Trim off the stalk and scoop out the center, making sure to remove all of the choke.
4)      Boil artichokes in prepared stock for 7 – 8 minutes. Test the center with a toothpick to see if they are tender.
5)      Remove from stock and plunge them into iced water to preserve color.
6)      Remove artichokes from water, pat dry and place on baking tray.

Next comes the filling. 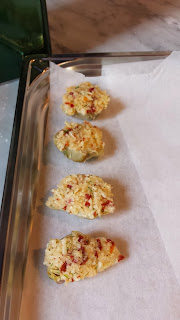 Cut off bread crust and place bread in bowl. Cover with water for a few minutes then squeeze out well and crumble. Chop garlic and parsley finely and add to bread. Add other ingredients. Mix thoroughly with your hands. Fill artichokes with stuffing, push it inside to be sure it’s firmly filled. If any tomatoes are on top, remove them as they will burn. Bake at 190 C for 15 – 20 minutes until top is golden brown.

To make serving your artichokes even more elegant, try making Chef Collin’s white sauce to go on the plate beneath the artichokes.

Make a rue by melting the butter in a heavy sauce pan and adding the flour, stirring vigorously. Slowly add the milk, stirring constantly. When the sauce is smooth and almost boiling, remove from stove and stir in cheese. Season to taste.

This was my favorite dish of the evening. Artichokes are not abundant here, but I can find plenty of other vegetables that I’ll be stuffing, maybe even during this upcoming holiday season. 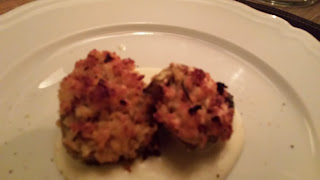