How long will you garden this year?


I’ve heard more people than usual talk about putting their gardens to bed early this year. We’ve had so much that gardeners have lost tomato plants to root rot. My tomatoes aren’t producing like usual, but the garden is still producing.

Unless there’s a weather disaster, I typically harvest fruits and vegetables through October, sometimes even into early November. Here’s a tour of the garden this week with a few thoughts on the longevity of each plant. 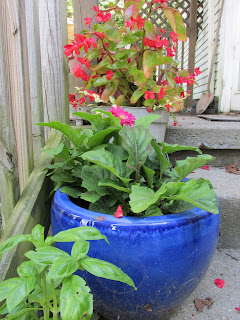 Come to my house and plants will greet you as you walk up the steps to our kitchen door. The basil (bottom) will last until first frost. I’ll bring it indoors before first frost, or put it in the greenhouse, but it seldom does well after summer. Next are the Gerbera Daisies. They are one of my favorite flowers because of their vibrant colors. They’ll live inside during the winter and even bloom every few months if they get enough light. My goal is to keep them through the winter so I can put them out again next year. At the top you see the Angel Wing Begonia. I’ve tried to keep it inside over the winter but it gets gangly. If you have a tip for how to prevent that, let me know! 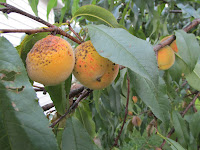 Our peaches didn’t do so well this year. The problem was a double one—too much shade from a still-growing tulip poplar tree and too much rain. We are getting a few small fruits and they won’t last more than another week or two. The tree grew from a peach pit thrown into our yard so we’re happy with anything we get from this unexpected addition to our garden. 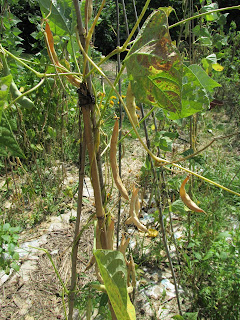 I picked about two-thirds of our beans over the weekend. I like growing beans to dry then store over the winter. This year I grew our typical Pinto Beans along with two experiments—Pawnee Shell Beans and Hutterite Beans. I’ll give a taste report on the last two when I try them. The rest will be dry enough to pick within the month. 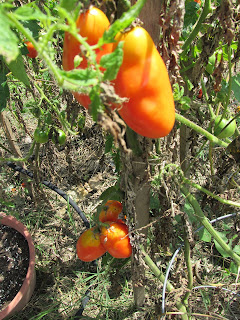 I don’t know how long the tomatoes will last. These San Marzanos are the happiest in the bunch right now. I do have seven plants elsewhere in the yard that came up as surprises from last year. They all still have green tomatoes and didn’t get as much rain so perhaps they’ll produce longer. 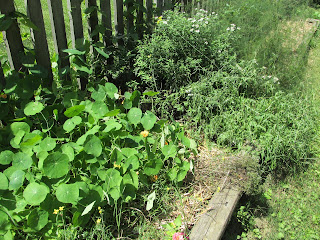 In the foreground are the nasturtiums, which have grown abundantly this year. They should last until late September or October. Behind them is the perennial Mountain Mint (with the white flowers) that I rub on my skin to repel mosquitoes. It will be okay until a hard frost. 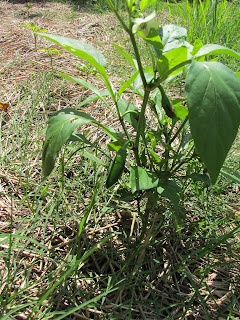 My peppers did poorly this year, another victim of shade and rain. They usually last until first frost and sometimes past then if I cover them. 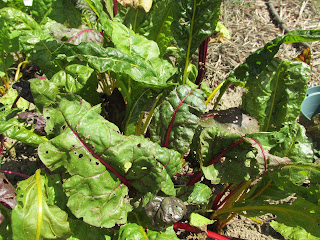 The Swiss Chard has been abundant this year and will produce throughout the fall. That makes me happy because I do love chard. 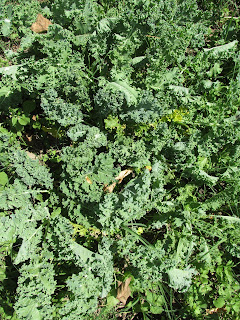 The kale also continues to flourish, giving me abundant opportunities to experiment with this healthy veggie from the cruciferous family. 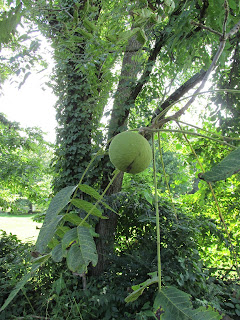 Yes, we have a walnut tree. Our best walnut harvest was when a local man collected our walnuts, and what fell into the neighbor’s yard, took them for processing then brought us a package of ready-to-use walnuts as payment. I hope he shows up again this year because I’m happy for someone else to do the work and keep a portion of them. 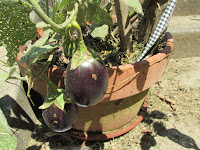 The miniature eggplant has done well. Will we get another harvest of it this year? Stay tuned. I’m still relatively new with this fine vegetable so I’m learning. It has produced several nice fruits in two harvests so far. 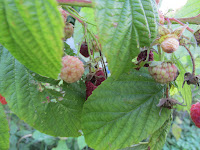 Raspberries, lovely raspberries. The rain has made them plump. They usually give us fruit until first frost. 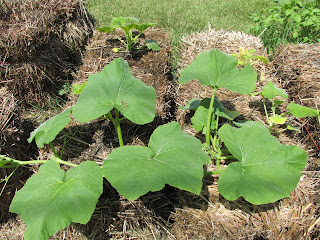 Here’s the year’s experiment—squashplanted in straw bales. Zucchini, Delicata and Butternuts are growing. Will the winter squash plants produce before frost? I’m not sure but I am hopeful. 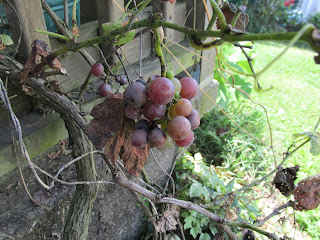 We get a few grapes in lucky years. It’s not that they don’t produce; the wildlife usually get to them before we do. This year, the cardinals have been chirping happily as they eat.

What’s growing in your garden now?
Posted by Beth Dotson Brown at 12:41 PM No comments: 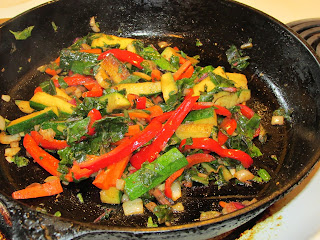 My spring and summer days have gone into planting, weeding, watering, harvesting then eating or preserving. Yes, in my absence from the blog I’ve been doing what I write about –enjoying the goodness of the garden. I hope you’ve been doing the same.

I return today with last night’s meal. Anyone who’s been in a Mexican restaurant has smelled the sizzling fajitas as the onions and spices waft through the air on a trail of steam. The server delivers the tempting plate to a neighboring table and I sometimes wish I had ordered it.

Fajitas are one of those dishes that easy to prepare at home, especially if you have leftover fried chicken. My husband is the fried chicken king. He generously cuts the breast portions in half so I have smaller pieces that are more appropriate for my appetite. If only the two of us partake of the chicken, I have plenty for leftovers for the upcoming week. So I return to my blog with Kentucky Fajitas, created with Jim’s fried chicken and vegetables from the garden.

Slice first four vegetables into small sticks. Heat oil at medium heat in skillet. Add veggies and a little salt. Warm chicken in toaster oven. (You can also use a microwave or the skillet, but I find a toaster oven keeps it moist and doesn’t heat up the house tremendously, a benefit in warm weather.) Chop chard until you have 1 cup or so. Chop garlic and add to veggies. When veggies are nearly as soft as you want, toss in the chard then add a sprinkle of the remaining seasonings, except salsa. Turn veggies to low and check on chicken to see if it’s heated through.

Grate cheese. I use whatever I’m in the mood for and have in the house. Sometimes I like the crumbly, white Mexican cheese. Then I get on a Swiss cheese kick or only have cheddar in the house. Last night I used marble cheese.

I also alternate tortillas. I prefer corn tortillas, which have more flavor and fewer calories. Sometimes I also use whole wheat tortillas. Either kind will warm well in the microwave for 10 – 20 seconds or in a warm skillet. 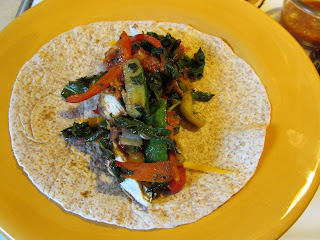 The result? When I return from our favorite Mexican restaurant, I drink lots of water. Their flavorful food is high in salt. Not so for our home-grown and prepared Kentucky Fajita. So try your own and enjoy the goodness of your own garden.
Posted by Beth Dotson Brown at 12:25 PM No comments: