I'm eating and cooking in Italy. Look for my next post in early November. Ciao!
Posted by Beth Dotson Brown at 8:57 AM No comments:


Aah, the glory of fall. The air is crisp, the sun is bright and the humidity has flown away on the fall breeze that’s just beginning to carry the tulip-shaped leaves from our trees. It’s a refreshing time of the year to be outside putting this year’s garden to bed.

Working in the garden is one of my greatest joys. As someone who spends so many of my work hours in front of the computer, I revel in the contrast of the hard, physical work that draws out perspiration and stretches my muscles here and there so they’re sore the next day. I pulled weeds, dug plants that needed a new home, harvested sweet potatoes and tomatoes, and made mental notes of what to do or not do next year. A definite must is to make myself take a break from my desk to do that body-challenging, mind-freeing garden work. It always increases my energy and peace of my mind.

Encountering this year’s planting failures as I clean up doesn’t feel as good, but I’m not too hard on myself. I  learn from my mistakes. My lasagna garden was too damp for anything to grow well there. I’m unsure if it’s my inexpert layering or lack of sun due to young trees and tall weeds in the fence line that we didn’t get eliminate. I definitely have to rethink that next year.

One thing I will try again is the straw-bale planting. Although my first planting didn’t succeed, I harvested two butternut squashes from a bale on Saturday. Three others are still growing. I have hope that they’ll make it to maturity.

I continue to enjoy putting some vegetables in pots in late spring or early summer. If they’re healthy, pots can give them a longer life since it’s easier for me to control their water intake than those vegetables in the garden. I can also move them as the sun shifts throughout the season. I still have tomatoes and eggplants in pots that are ripening.

My fall and winter experiment will be trying to raise more tomatoes. A number of babies popped up unexpectedly in a large pot so I re-potted them individually. I’ll try some in my greenhouse and more under a grow light.

As I work in the garden, I also work up an appetite. It’s a good time to have everything I need for supper in the slow cooker. I developed this recipe using our home-canned tomato juice and salsa. Of course if you don’t have your own, you can use your favorite store-bought brand.

Chop 2 carrots and 1 onion. Put them into slow cooker with four chicken thighs, ¾ cup rice (your favorite kind), 1 quart tomato juice, 1½ pints of salsa. Cook on high for three hours then relax and recover from your gardening while you enjoy tender chicken and flavorful rice.
Posted by Beth Dotson Brown at 5:33 PM No comments:

The perils and flavors of novice recipe creations


Our kitchen became pawpaw central during the weekend when I challenged myself to create my
own pawpaw cupcake recipe. After all, I had made good cupcakes before. Earlier in the year I conquered my fear of heavy cakes by learning I had to spend more time with the blending. And I’ve created main and side dishes that have drawn good reviews.

But baking, as I’ve heard said more than once, is more of an exacting science. And science has never been my best subject. 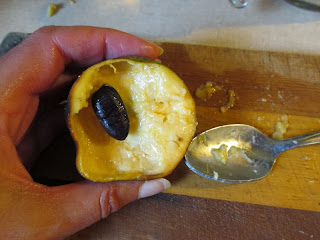 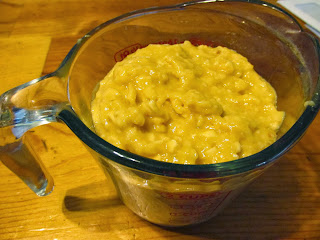 The first thing to do when baking with pawpaws is to cut open the pawpaws, extract the seeds (using a spoon helps), discard the skin and put the pulp into a food processor or blender to puree. The next thing I had to do for cupcakes was to determine what the pawpaws could substitute for. I’ve seen fruit used to cut down on fat in recipes, so it seemed important to keep that in mind. In addition, pawpaws are sweet so I wanted to lessen the amount of sugar.

I started with a recipe I have for butternut squash muffins that become imitation cupcakes when topped with a light cream cheese frosting. I’ve played around enough with cream cheese frosting that I felt satisfied with one batch of my idea for it. The muffins, though, defied my pawpaw substitutions and alterations. The end product still tasted like muffins—flavorful and moist, but not what I was looking for.

Next I went to the book called Ratios, by Michael Ruhlman, and read the section on cake batter. Sponge cake or pound cake? I think of pound cakes as heavy so I went for sponge cake. It was either the wrong choice or I again made incorrect alterations. I’m not sure what didn't work, but the cupcakes sunk in the middle and didn’t have anything close to the consistency that I wanted, even though tasters liked them.

Next, I consulted the pound cake ratios and gave it a try with alterations. My challenge was how to incorporate the pawpaws for a good flavor. I wrote down my guesses for the recipe and baked again.

I could have given up. I had promised to take a pawpaw dessert to a meeting and I have a great pawpaw cheesecake pie that always turns out well. However, my determination (or stubbornness) pushed me onward.

One more attempt. I decided to increase the amount of butter and use a small bit of oil as well. I also added more eggs and pawpaw pulp. The result? It’s good. Not spectacular. I would make a few more alterations the next time. However, I did come up with something that tasters compared favorably to carrot cake and spice cake. And I learned it takes many tries for a novice baking recipe creator to finally succeed. 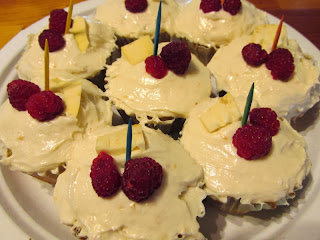 Pick up some paw paws 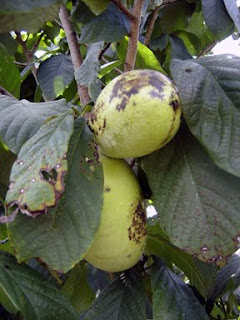 It’s pawpaw season, friends. That means it’s time to find those prized fruits and enjoy them. For me, it means turning the fruits into puree that I can freeze and use this winter.

But let me not get ahead of myself. I do tend to get so excited about paw paws that I forget what’s first. So first, you should know it’s the largest fruit that’s native to the United States. It grows in the eastern part of the country on trees. They grow in the wild or can be cultivated. When the fruit is ripe depends on where you are and the summer’s weather. In Kentucky, you can generally find them from late August through early October.

The second thing you should know is that when they are slightly soft (they give a little) they are ripe. You can cut the fruit down the middle and pull out the large, black seeds. Eat them and they will make you sick. However, eat the luscious pulp and you’re in for a vitamin and anti-oxidant treat that will make your taste buds dance with delight. The taste varies from fruit to fruit, but tends to be a sort of banana, peach, mango taste with a texture similar to that of an avocado.

Third, know that the ripe fruit is quite sweet. That, plus its texture, means it can work well in some baked goods, like muffins and breads. That also means that if using it instead of another fruit, like a mashed banana, you might want to cut down on the sugar. And what’s better than a natural sweetener? For me, something natural and healthy is a choice way to satisfy my sweet tooth.

Every time I puree another batch of paw paws, I foresee winter days of creating new treats for us to try. I simply cut open the fruit, use a spoon to get out the pulp and to separate away the seeds, then put it into my blender to puree. I measure it and put into snack-bag (I cup) and quart (2 cups) freezer bags. Nothing else in my freezer has the same yellowish-orange color.

My husband and I have been splitting paw paws to eat because the fruit is so rich I can’t consume a whole one on my own. I’ve also made us ice cream and smoothies, in which I also added raspberries since they’re ripe. Here are two recipes you can try.

Paw Paw Ice Cream (with thanks to the folks at the KentuckyState University Paw Paw Research Program. (Other recipes available on their site.)

Mix and pour into your ice cream maker then wait for the fabulous result.

Blend and enjoy, or chill first if you like.

Posted by Beth Dotson Brown at 4:29 PM No comments: