Easy and tasty turkey breast for any time


During December I looked through magazines and dreamed of the scrumptious foods I would make during the Christmas season. Dreams are often bigger and glitzier than reality and that was true this month.  There were so many recipes to attempt but only a limited number of mouths to feed. However, the Glazed Bacon-Wrapped Turkey Breast that I made today was definitely a winner.

I am blessed to have a group of women who I’ve been sharing my spiritual journey with for more than 20 years. We all come from different walks of life but have shared the twists and turns we’ve encountered—supporting, guiding and celebrating with one another through the years. Our Christmas get-together is always a special one and since I was hosting this year, I wanted to try something new. 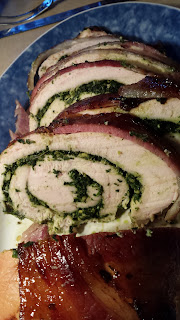 I found the recipe for the Glazed Bacon-Wrapped TurkeyBreast in the December issue of Good Housekeeping magazine. It looks beautiful and I wasn’t sure if I had the skill to pull it off, but it wasn’t hard at all. The recipe calls for a boneless turkey breast, which was considerably more expensive than a bone-in breast. Lucky for me my husband has enough skill with the knife to debone poultry for me. He did his part then I got to work following the recipe.  The most difficult part was using toothpicks to hold the round together since I didn’t have the called-for kitchen string.

The result was moist, garlicky meat that I will definitely make again. The parsley spread that goes inside was delicious. As we ate we speculated about the possibility of replacing the parsley with spinach, which would be easier to find at this time of year.

I’ll soon be searching the grocery store to see if they’ve marked down turkey breast so I can store one to use on another special occasion in the coming year.
Posted by Beth Dotson Brown at 4:54 PM